A birthday party and …

My son turned 4 (quite amazing, isn’t it). For a birthday party we decided to take him and his friends on a treasure hunt starting of with a picknick at the (admittedly very small) botanical garden. To pick up the treasures that were to be found, each little boy of course needed a bag. So I made some and then decided to also use them to decorate the table alongside the caution tape my son had asked for (it’s red and white over here).

So when the treasure hunters arrived, that’s what they were looking at: 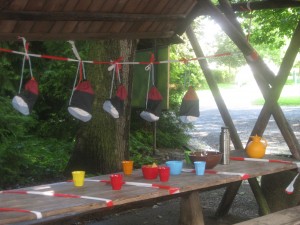 Also, I recently got the chance to make something on commission, as a little boy (or rather not that little anymore) needed a bag with his name on it. So I was asked for another version of these bags, that I’d made a while back: I also included a baby chicken as that’s on his closet at daycare. I simply cut out two roughly chicken-like shapes from yellow fabric. Then I stiched the wing shape on one of them, sewed them together leaving a little hole for turning. I flipped it inside out and filled it with some of the wool left from my daughter’s doll. Then all that was left for me to do was to close the whole and add eyes and a little comb and tail by hand. By the way, fall arrived rather quickly over here – might be time to make some hats!